Each September, pain advocates and specialists raise awareness about issues facing the millions of people living with chronic pain. One of the most pressing? The lack of treatments available to alleviate suffering. In this blog, we look at three top challenges of getting new pain drugs to market—and offer a potential solution.

Millions of people suffer from pain. In fact, a study reports that chronic pain affects more than 20 percent of Americans at any given time—or 50 million adults. The prevalence is only one side of the story. The other is that, due to the lack of safe and effective drugs on the market, many people simply have to live with this pain. Since September is National Pain Awareness Month, now is a good time to bring attention to this critical need: getting new pain drugs to market.

The Need for New Pain Drugs

The need for the development of novel pain therapies couldn’t be more pressing. But very few novel pain drugs have made it through clinical trials since 2007. In fact, most of the approvals of new pain drugs in this period were reformulations of existing compounds.

Getting new drugs to market is a challenge across many indications, but drugs targeting pain have some of the lowest trial success rates. There are also many pain etiologies, increasing the complexities of pain drug development.

This problem is exacerbated by the fact that most chronic and neuropathic pain is treated with non-steroidal anti-inflammatory drugs (NSAIDs) or opioids. Both classes of drugs can have serious side effects and, in the case of opioids, high addiction rates. The national recognition of the opioid addiction epidemic has heightened the need for the development of novel therapies.

So, what’s holding these new pain drugs back?

3 Challenges of Getting New Pain Drugs to Market

The main objective of clinical trials is to evaluate the efficacy and safety of an experimental drug treatment. To pass clinical trials and go to market, the drug must prove that it is not only safe but also has a significant effect in mitigating or treating the proposed disease or symptom. There are three hurdles that can get in the way of that goal.

Drugs that exhibit safety issues at doses close to efficacious doses are often deemed un-approvable by regulatory agencies. Several marketed pain drugs, however, also have safety concerns that make them unsuitable for long-term use.

Chronic use of NSAIDs can lead to gastrotoxicity. Opioid use can lead to short-term respiratory suppression and long-term addiction with risk of overdose. Indeed, nearly 50,000 deaths were attributed to opioid use in 2019.

While targeting new pharmacological mechanisms may appear to be the answer, this too has led to negative side effects. For example, anti-NGF agents have demonstrated efficacy in treating pain indications like low back pain and osteoarthritis, but their use has also been associated with neurological adverse events and potential joint destruction.

In general, experimental pain therapies must have better efficacy over the placebo with an acceptable risk-safety profile in placebo-controlled randomized trials. These safety issues may make an otherwise effective drug too risky to move forward with. The industry needs an alternative.

The next challenge is variable reporting of pain by patients in clinical trials. Accurate assessment of pain in clinical trials can be difficult, creating variability in the data that masks true drug efficacy. This is true for two reasons:

At the end of the day, pain is an individual experience. Each patient in a clinical trial has their own perception of pain intensity. On a scale of one to ten, one person’s “seven” could be another person’s “four.” It can also be difficult to standardize perception of pain from day to day. We all know that outside influences – for example, not getting adequate sleep – may make us more sensitive to pain on any given day.

Just as each patient has their own perception of pain intensity, each patient also has their own pain tolerance. Some cultures have higher pain tolerances, in which a patient may report feeling less pain after taking medication because their perception of pain is shaped by the norms of where they live and their surrounding community. However, a less tolerant patient may not report the same results.

Placebo response in clinical trials is the measured improvement of a patient after receiving a sham treatment (usually a sugar pill), resulting from several factors that may mimic drug response.

This is a major source of noise in trial data analysis, making it more difficult for statisticians to detect true treatment effect. This is because responding to a placebo is not proof that a new drug doesn’t work. While some otherwise effective pain drugs fail in clinical trials because of safety issues, other drugs fail because of an inability to see past the noise in the data and determine efficacy.

The placebo response problem has derailed a lot of new pain drugs from making it past clinical trials. In fact, it can account for as much as 60% of the measured treatment response with pharmacologic therapies across indications, making it difficult to see how the active drug is working. In certain pain indications, it’s even worse. For example, the placebo response accounts for as much as 83% of stiffness reduction and 75% of pain reduction in osteoarthritis.

Further, placebo response intensity has been increasing over time (while drug response has remained constant), leading to even more diminished treatment effect.

To account for placebo response and the two other issues above, clinical trials require large sample sizes to achieve adequate study power. Most studies need 500 or more patients. That all leads to higher development costs and longer timelines, further delaying these much-needed new pain drugs.

But this measure only hopes to drown out the effects of the placebo response by spreading its impact over a large enough sample size. To truly address the placebo response, researchers need to see it as not a patient problem but a statistical analysis problem.

How Placebell©™ Can Help Accelerate Drug Development for Pain

To do this, Placebell©™ combines patient psychology data with a disease-specific machine learning algorithm that predicts placebo responsiveness relative to each patient. Statisticians can then use this score as a covariate in the statistical analysis. This method helps decrease variance and increase study power, creating the opportunity for more novel pain treatments to make it out of Phase II and Phase III trials. In fact, Placebell©™ explained 35% of the data variability related to the placebo response in a sponsored, phase II RCT in osteoarthritis—increasing the precision of the estimated treatment effect by 40%.

Now more than ever—especially in light of Pain Awareness Month—the industry is calling for better, new pain drugs to alleviate the suffering of millions of people across the world.

The placebo response is but one major challenge that drug developers face. For years, there hasn’t been a universal, scalable and low-risk solution available to better manage this phenomenon. Today, there is a way forward to keep factors like the placebo response from getting in the way of new, non-addictive treatments that can help millions of people. 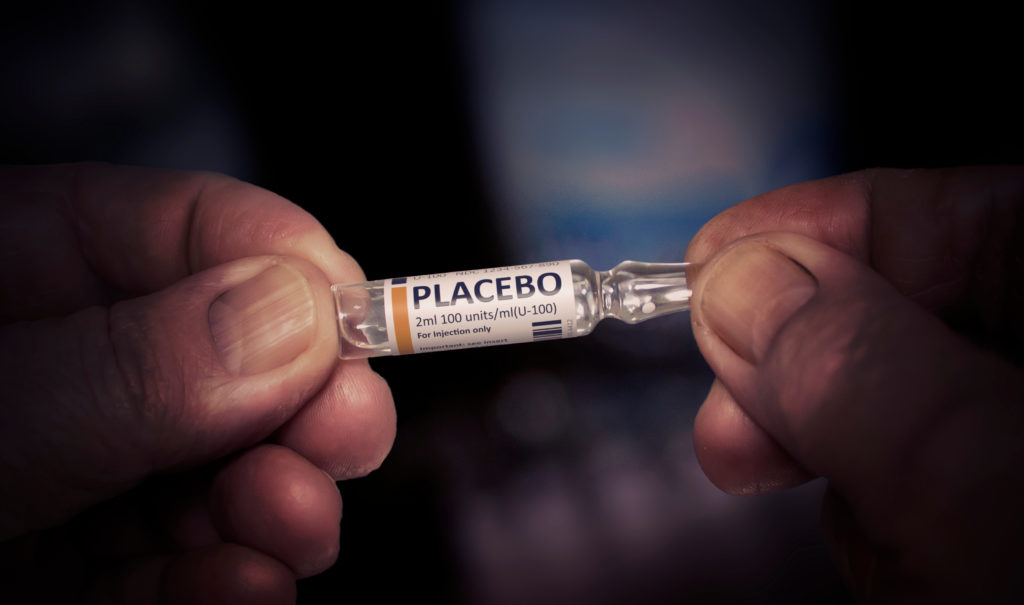